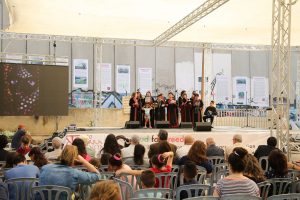 The Wall is a Denial of God’s Creation

The AEI, member of the International Catholic Peace Movement (Pax Christi) organized its Ninth Annual Sumud Festival on September 21, 2019 in the context of the World Week for Peace in Palestine Israel and the International Day of Prayer for Peace. The World Week and Day of Prayer are celebrated by members of both the World Council of Churches and Pax Christi International. The specific title of the festival was this year “The Wall is a Denial of God’s Creation,” in accordance with the theme chosen for the World Week. The aim was to raise voices of Palestinian youth, children and women saying “no” to the Wall as a denial of God’s image in His creation and a violation of values of freedom and equality. 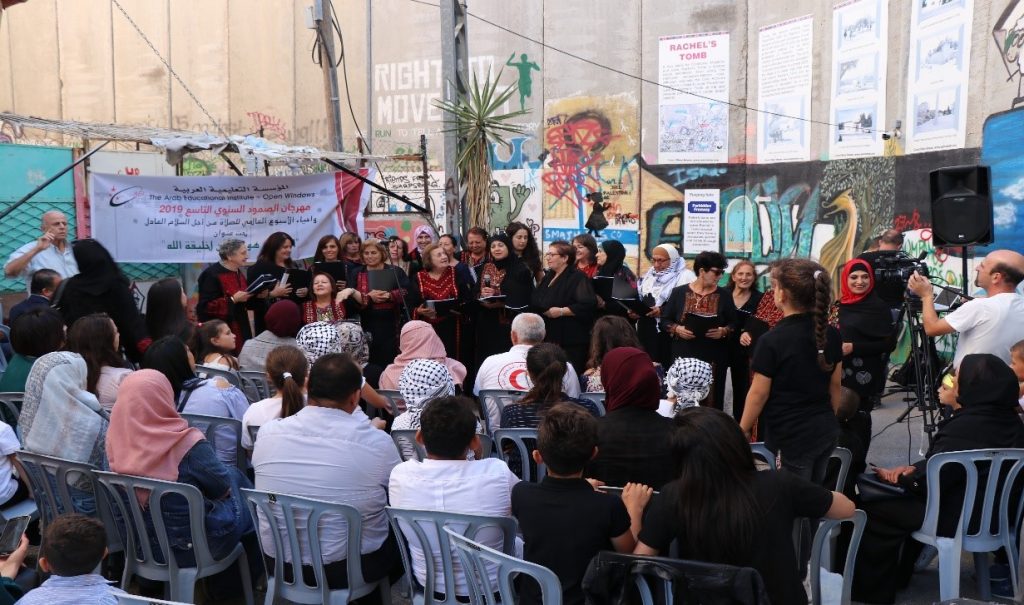 The festival and the World Week activities were held near the Separation Wall in the Rachel’s Tomb area. The programme began with a minute silence for those afflicted by the Wall. Two Islamic and Christian youths – Ibrahim from Hebron and Claudette from Bethlehem – read Quranic and Biblical verses on justice and peace. Afterwards the Palestinian national anthem was played. Mrs. Rania Murra, AEI’s Director, welcomed all, including Mr. Zuheir Tmezi, Director of the Ministry of Culture in Bethlehem, and all youth, children, women, parents and invitees from Hebron downtown and villages south of Dura and near Bethlehem, as well as trainers and facilitators of AEI advocacy projects.

All speakers, including Rania Murra, Fuad Giacaman and Zuhair Tmezi, spoke about AEI’s fields of work and objectives: deepening, preserving and reviving the Palestinian culture and an open national identity which is in the minds and hearts of AEI’s members. The Wall Information Center got some special attention. The different activities performed during the occasion contributed to the seeding of hope and sumud on the path toward gaining our national rights, justice, freedom and peace.

This public gathering was a golden opportunity and platform for different audiences to spread the message of AEI’s interreligious programme Citizenship and Diversity: Christian-Muslim living together towards the regional Bethlehem community as well as those present from the Hebron and Dura regions of the southern West Bank.

The Quranic and Biblical readings about justice and peace; the members of children, youth and women groups coming together to pray for peace, and singing, dancing, reciting poems, pronouncing trills, painting on the wall, marching with candles, hoping against hope, and finally sharing food – all were real examples of building trust and internal, friendly and peaceful relations between the components of the Palestinian people. The occasion mentioned conveyed a message of better understanding, reducing some stereotypes, and giving a good model about living together.

This year’s Sumud Festival was a good occasion to disseminate information about AEI’s advocacy projects at schools, youth clubs and among young women.

The occasion has been well-covered by local radio Mawaal that broadcasted the celebration live on its facebook page. The audiences from the three communities shared the live broadcast on their personal accounts.

The children’s participation was noticeable and appreciated by the attendees. Their talents, skills, and potentials were admired not only by the organizers and trainers but also by the invitees and of course by their parents. The themes the kids chose reflected the title of the Festival: The Wall is a Denial of God’s Creation.

Caring for the environment, protection of and love for the land and country, and cultural identity and heritage were some of the topics. The children’s and youth’s involvement at this occasion was highly praised during their readings of quotes, reflections and prayers including poetry of the famous Palestinian poet Mahmoud Darwish. Some of the quotes and prayers were previously fixed on the Wall by the youth and children in advance of the celebration.