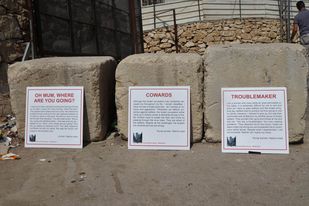 Ben Gvir, the upcoming Israeli minister of “public security”, is from Kiryat Arba, the large Jewish settlement on walking distance from the center of Hebron. He is a well-known personality associated with followers of the former Meir Kahane who in the final decades of the last century advocated for the expulsion of Palestinians from Israel and the West Bank.

There are also some hundreds of Israeli settlers living along or close to a strangely empty street in the center of busy Hebron, Shuhadeh street. This long street and its side streets in the Tel Rumeideh quarter are the location of several small Jewish settlements. The area has become an open air prison surrounded by checkpoints. The army does not permit Palestinians from outside the area nor Palestinian cars to enter the street. Only Palestinians who live along the street and in the neighborhood are allowed in. All smaller and larger thoroughfares from the busy center are blocked. Israeli settlers have however free access to the neighborhood both on foot and in cars.

The area is heavily militarized, with watchtowers and army posts galore. At one of the checkpoints a remotely controlled system has been installed for crowd dispersal, which includes the capacity to fire stun grenades, tear gas and sponge-tipped bullets.

A few weeks ago my Bethlehem-based organization, the Arab Educational Institute, put on display “story boards” from a roof opposite Shuhadeh Street, with stories of local Palestinians telling about the violations of dignity the inhabitants suffer on daily base (see photos). In the last few years, AEI worked with local Palestinian women’s organizations in Shuhadeh Street and other parts of the city under Israeli control to try to improve services and develop an early warning system.

Just over a week ago, no early warning system could predict the hell that broke loose in the street.

It happened during Chayei Sarah, the fifth weekly Torah portion of the annual cycle of Torah reading, which discusses the life of the patriarch Abraham’s wife, Sarah, who according to tradition is buried in Hebron. An estimated 30-40,000 Israeli visitors came on Friday 18/11 and Saturday 19/11 to the city. It was like a pelgrimage, highly nationalistic and politicized (as we know it in Bethlehem during Rachel’s Day).

The first Chayei Sarah event was held in Hebron in 1996, in an effort to prevent the signing the following year of the Hebron Protocol, which divided the city into two sectors – H1 under civil Palestinian control and H2, where some 700-1000 Jewish settlers live as well as 20.000 Palestinians, and which is under full Israeli military control.

Chayei Sarah has expanded through the years. The visitors, who include both ultra-Orthodox and secular Israelis, put up tents in the city center. There is not only a camping or holiday youth atmosphere but also one of racist supremacy, a will to assert who is the “lord of the land.”

The newspaper Haaretz and the peace movement outlet +972 provide a couple of quotes about what happened as well as the atmosphere.

In advance of the coming of the visitors, the Israeli army had closed the central market area of Hebron and demanded that shop owners close their stalls to allow settlers to march there. This did not occur without violations of dignity. Louie, the owner of a shop in the market, said the soldiers “threw our goods on the ground and then fired tear gas and rubber bullets to make us go away.”

Then a full-scale attack happened on and nearby Shuhadeh Street. An Israeli soldier said that he saw hundreds of Jews throwing stones at Palestinian homes over a two-hour period. “We tried to gain control over the situation and every time, Jews showed up and threw stones and we didn’t manage to catch them,” he said. “At the height of the incident, hundreds of Jews came and started calling us [Israeli soldiers] Germans [that is, nazis] and spitting on us.”

Local Palestinians had a somewhat different account about the role of the army.

“There were 50 settlers here. There was no one here to help me. One of them punched me in the shoulders and in the back,” 26-year-old Yousef Azzeh described.

“My head started spinning. I ran away so that they would follow me and not come to my house. I didn’t have any strength, and I couldn’t breathe. I fell down and screamed and then I saw soldiers beating my friends while there were settlers above my house.”

“I grew up here. It has never been like this,” Azzeh said. “There had been soldiers here. Where were they yesterday? If they say that they protect me, it’s not true. If you want to protect me, you can put 20 soldiers here. With my own eyes, I didn’t see a single soldier providing protection for the neighborhood.”

Sixty-year-old Bassam Abu Aysha said that in anticipation, Palestinian residents were prepared to stay home out of concern that violence might occur.

“There is not a single house in Tel Rumeideh that was not attacked, what happened today was not normal.  A 15-year-old was attacked with a stone in the face and his nose was broken, people were sprayed with pepper spray,” he said.

Abu Aysha pointed to a low fence surrounding his house, saying that from there, he saw Israelis jumping over it and into his yard, where they threw stones. Thanks to protective netting and bars, the building’s windows were not damaged. “Tel Rumeideh is a closed-off place. If elsewhere [in the city] there are places to run away to, here there’s nowhere to go,” Abu Aysha said.

“We wanted to protect our families, so we went outside,” he recounted. He said that after going outside, he was actually attacked by the army. “ Soldiers kicked him and threw him on the ground. “The same soldiers we speak to on a daily basis, these are the ones who beat us,” he said.

While one soldier was holding me down, a settler arrived, who punched me. They have no respect. I’m 60 years old, but I was the first to be attacked.”

Abu Aysha injured his leg during the attack and afterward was taken to hospital. He said that a doctor recommended that he stay overnight for monitoring, but he decided to return home out of concern that the attacks would resume. “Every year the army permits the settlers to do what they want but they don’t hit us themselves. This year, the soldiers hit us more than the settlers,” Abu Aysha said.

“They [settlers] took stones from the nearby cemetery and threw them at us. Jewish friends who saw what happened on the news called to say they were ashamed.”

The hundreds of Israelis who did this on Saturday were riding a wave of fanaticism and impunity. The marchers were filmed chanting “a Jew is a soul; an Arab is a son of a bitch” (which rhymes in Hebrew). Israeli army officers had previously invited Baruch Marzel, a far-right activist and Kahanist like Ben Gvir, to give a lecture on the history of Hebron to reservists serving there.

“In the past it was still possible to object to lectures from rabbis; today the majority [of soldiers] is religious and any attempt to object is much harder. The people inviting those lecturers are senior officers in the brigade and the battalion,” a soldier said.

Last week, a group of Israeli peace activists traveled to Hebron to meet with local Palestinian families as an act of solidarity.

In film footage, Israeli troops were seen attempting to arrest an activist, who flees, before he was knocked to the ground and punched.

“Ben Gvir is going to sort things out in this place,” a soldier had told him. “That’s it, you guys have lost … the fun is over.” Asked by the filming activist, “Why? Am I doing something illegal?” the soldier replies, “Everything you do is illegal. I am the law,” and orders the activist to step back.

The soldier was wearing a patch to the back of his military vest that read, “One shot. One kill. No remorse. I decide.”

“We can already see the effects of Ben Gvir’s appointment on the ground,” read a subsequent statement issued by the Israeli human rights organization Breaking the Silence. In a reaction to the last event, Ben Gvir said that the army should investigate whether the peace activists had “provoked” the soldiers.

The Jewish settlement in Hebron is expected to grow in the coming years. Over the past year, construction began on 31 housing units , while 70 additional housing units will be in the area of the city’s wholesale market area, which belongs to Hebron Municipality.