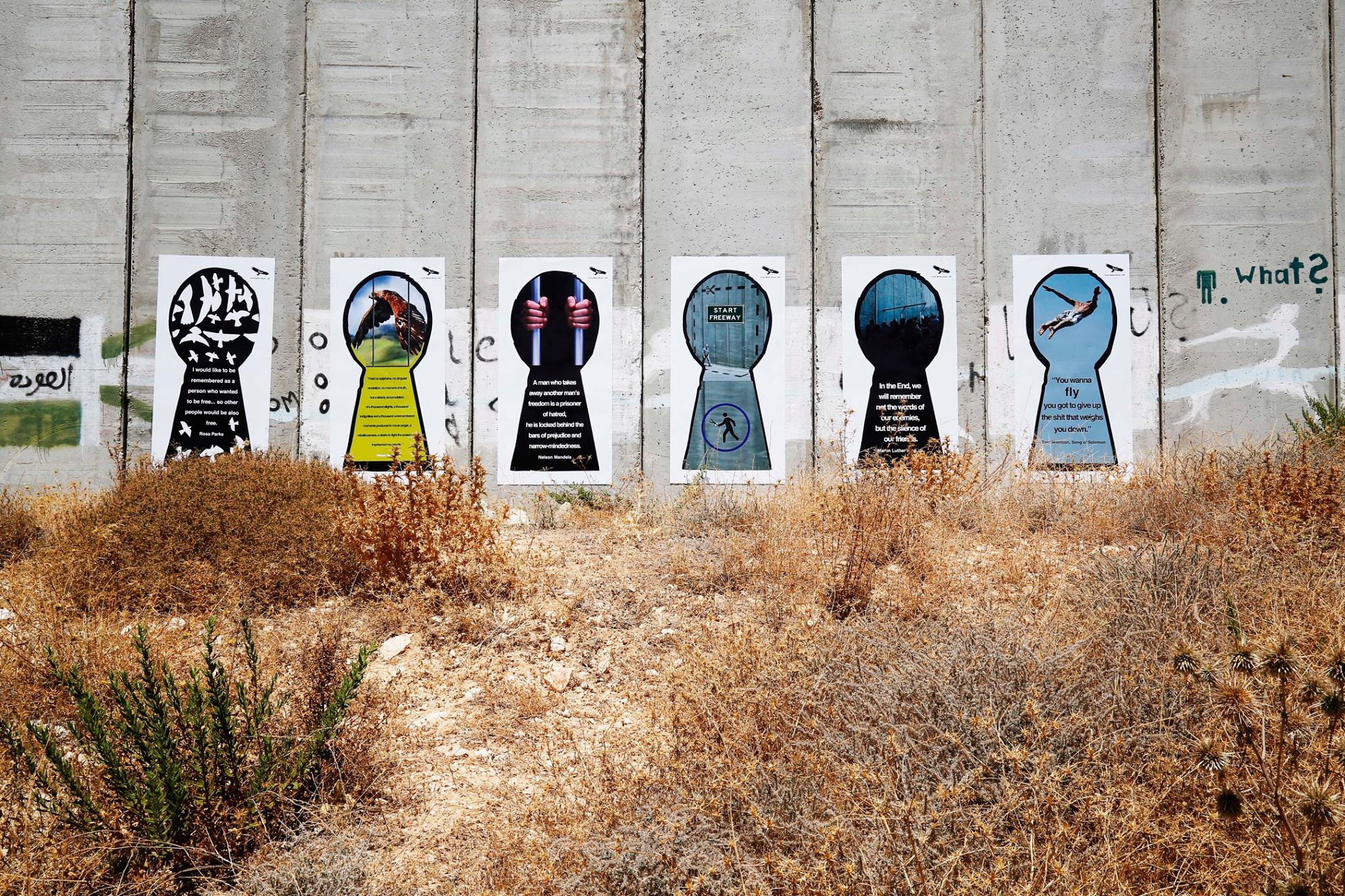 In late October, a group of 30 local young women launched the “Artas Deserves to Be Beautiful” advocacy campaign in Artas, a village to the south of Bethlehem. They wanted to solve the waste problem in the village. One participant relates, “I used to read slogans such as ‘After failure comes success!’ or ‘When there is determination, we can reach our goals.’ I did not understand the meaning of those words until I saw some powerful models of women showing determination, passion, and strength.”

The women in the village entered the field of tax collection. As volunteers, some went from house to house to encourage inhabitants to pay waste-collection taxes and to raise awareness about the problem of waste; others went to schools to give training sessions to students. They explained the tools of advocacy and campaigning, how to involve stakeholders and address those in authority.

The cleaning campaign featured additional activities such as removing garbage from the street, putting flowers in tires along the road, asking the police to take care of parking issues, and celebrating the campaign with a photo exhibit and hanging slogan posters on walls in public areas. As a result, the participants won over students and teachers as supporters and volunteers. The mayor and village council as well as a local heritage NGO supported the actions. The women made an arrangement with the solid-waste department in the Bethlehem district. Authorities agreed to make Artas a “model waste-collecting village.”

The campaign did not proceed unhindered, though, as our participant mentions: “We faced many difficulties and challenges from cultural traditions as well as from society in general, which sometimes seemed determined to punish us for implementing the campaign. In spite of these challenges, there were some beautiful moments when people, especially the young in our society – some of whom used to be our opponents or neutral bystanders – came to help us and join the campaign as their attitudes began to change.” And: “This campaign changed the outlook of the villagers towards waste management. Above all, it changed me. I have become an ambitious young woman who seeks a better future.”

The Artas campaign has been part of an ongoing broader effort of sumud advocacy among young women’s groups and high school groups in the Bethlehem and Hebron districts of the occupied West Bank. Sumud is Arabic for steadfastness or resilience.

Sumud indispensible for a just peace

Sumud advocacy confronts the slow uprooting of Palestinian communities in the occupied West Bank, such as in Israeli-controlled Area C. The many reasons for this process of uprooting include people’s lack of control over resources as a result of the Israeli occupation and a concomitant sense of powerlessness; the pervasive violence and destruction due to measures imposed by the occupation; the fragmentation and isolation as a result of movement restrictions; and, finally, migration.

In a manner similar to the grassroots community mobilization in the West Bank and Gaza Strip in the 1980s, sumud advocacy challenges the idea that uprooting is inevitable. It promotes awareness that efforts to keep people on the land and preserve communities are possible, against the odds, and that the local population can actually contribute significantly to these changes. In the long run, sumud advocacy is indispensable for a just peace.

Context-sensitive sumud advocacy fosters the experience of local belonging and rootedness. A sense of belonging to a valued community, as in Artas, is needed to be able to face any challenges and obstacles that might emerge in advocacy work. Cherishing values is essential to peace advocacy. Community peace-related values include a sense of citizenship despite the ongoing curtailment of rights as a result of the occupation and sometimes as a result of cultural traditions; the human value of caring; respect for each other’s opinions and beliefs; the implementation of basic tenets of international law, including the right to safety and security; and last but not least, respect for the land and the soil of Palestine.

Belonging is not just an emotional state nor is sumud just staying on the land. Both are about actively working to make the required changes possible. (Sumud is sometimes translated as a verb: standing fast). Fortunately, there is a long tradition of community volunteer work in Palestinian society that is essential for this type of advocacy.

A typical task during the sumud advocacy training sessions has been the search for “energy sites” within a community, places where there is a match between what should be done, what can be done, and the people who are willing and able to help do it. Our experience working in schools and clubs shows that there is actually a lot of unspent energy. As is the case everywhere in the world, teachers in Palestine are key persons in getting people energized and activated for peaceful community-based changes. In its efforts to diminish rote learning at schools, the Palestinian Ministry of Education and Higher Education has identified schools that are willing to begin new extracurricular advocacy activities.

We have learned that the most important aspect of advocacy training sessions is an attitude of deep listening to individual and community stories. During a session in downtown Hebron, a young woman narrated what happened to her family at checkpoints. In no time at all, participants were in tears, and the trainer was moved to hug the speaker. In fact, the most difficult part of the training is, according to one trainer, listening to the women’s stories. Telling and listening to such stories is needed to establish rapport and to channel grief, frustration, and anger into energetic, joint work.

Topics chosen for advocacy by the school students and young women were typically related to solving practical issues of access and participation while improving the community’s appearance and strengthening its identity. In addition to the garbage collection in Artas, the young people chose to create a peaceful garden for young children, protected by school authorities, in downtown Hebron (in order to keep the children safe during times of tension caused by settlers); promote Palestinian products at a school in Beit Sahour to create employment and help avoid emigration; safeguard frequent and regular school transport along a possibly dangerous settlement road near the village of Walajeh; ensure access to health clinics, given the many checkpoints and other movement restrictions in Hebron; and call for measures to prevent school dropouts, selected as a topic by yet another school in Beit Sahour.

When mapping the problem – understanding causes, seeing linkages, asking questions – the youths almost always confront the broader question: but what about the occupation? Oftentimes local community conflicts are directly or indirectly related to the broader political situation, such as when frustration because of occupation is channeled toward one another inside a group or community.

A school community and a young women’s group chose the social environment of the Separation Wall as an advocacy topic. They engage in advocacy in north Bethlehem by requesting that local authorities lower taxes for local shops so as to keep them viable. They plant flowers in a neighborhood that has become desolate as a result of the Wall, remove garbage, and create parking arrangements for visitors, in cooperation with the police. One NGO in Aida Refugee Camp along the Wall around Rachel’s Tomb in Bethlehem took up the issue of awareness raising about drugs, a problem which is an increasing source of worry for local parents and teachers. Drug-dealing often takes place in the streets along the Wall – in Area C, under direct Israeli control.

Keeping communities near the Wall alive is clearly a task of sumud advocacy. However, does such advocacy not risk normalizing the Wall, treating it as if it were a natural given? Obviously, any advocacy efforts near the Wall must inform international communities and visitors about the requirements of a real peace. The participating youth therefore also opted to support human rights through a Wall information center, informing international visitors about the impact of the Wall on Palestinian life. They are asking themselves: Can the Wall around Rachel’s Tomb in Bethlehem become a second “center” in Bethlehem for visitors who not only visit the Church of Nativity but also want to witness the impact of the occupation and the Wall on Palestinian communities?

The groups of youth constantly face the same question: How can the work be sustainable? In Artas, the women have been invited to present themselves as candidates in local elections. They have the opportunity to make use of a hall in the municipality and use facilities of the heritage center. Their campaign is still going on. In various communities, the issue of income-generation comes up, such as selling products to local visitors and creating services for international tourists. A village such as Artas is known for its religious and cultural heritage.

*This article covers a project funded by the European Union and CAFOD: Engaging, empowering and equipping diverse and marginalized youth and amplifying their voices for peace. The contents are the sole responsibility of the authors and do not necessarily reflect the views of the funders.

Rania Murra is director of the Arab Educational Institute in Bethlehem and a member of the international board of the Catholic peace movement Pax Christi.

Anthropologist Dr. Toine van Teeffelen is an adviser at the Arab Educational Institute and manager of the advocacy project.

Sumud Advocacy: What is it?

Sumud advocacy is the effort of a Palestinian community to preserve its roots, foster a sense of belonging, and work on development by volunteering, raising awareness, making connections among different groups in the community, and demanding the right of security and protection. Any just peace is built on sumud advocacy.