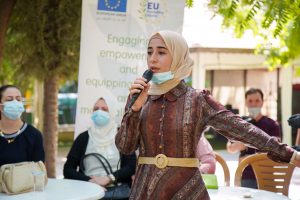 Coordinated by the Arab Educational Institute, a range of Palestinian schools and youth/women clubs in the occupied West Bank have been involved in an advocacy project for Palestinian youth (2018-2020), called Engaging, empowering and equipping diverse and marginalised youth and amplifying their voices for peace. The project promoted civil society engagement in non-violent action for a just peace.

The 300 school youths and 300 young women in the Bethlehem and Hebron areas were effectively trained in the concepts of advocacy and sumud – the concept AEI prefers to apply in relation to nonviolent actions for a just peace. The training fields included cultural and legal sources of nonviolence and peace making:

Besides the knowledge associated with these fields, skills of nonviolent advocacy focused on:

The school youths and young women (up until 35 years) conducted local advocacy actions, in 2020 combined into broader campaigns.

Greek Catholic Patriarchate School Peter Nettekoven-Beit Sahour: requesting the church to make a call to Palestinian youth not to emigrate. Key stakeholders: school leadership and some local church leaders. The initiative involved networking with stakeholders and a public meeting at school.

The Good Shepherd Swedish School community in Bethlehem protested diminishing UNRWA services as a result of funding cuts. UNRWA headquarters in Jerusalem and in Dheisheh refugee camp were approached to voice this demand, publish the call on the UNRWA website, and transmit a letter to secretary general UN.  At the end a public school meeting was held with with various artistic elements and speeches.

Dar al-Kalima Evangelical Lutheran School in Bethlehem chose the illegality of the Wall as theme for their initiative, culminating in a public meeting at school. The students networked with journalists, and ARIJ, a local NGO specialized on development issues.

Greek-Orthodox Shepherd’s School in Beit Sahour chose school drop-out as theme for advocacy. They especially networked with officials at the PNA Ministry of Education and school leadership, who attended a final events, with music, drama, storytelling and speeches, calling for a reduction of school drop outs.

Khan al-Ahmar young women raised their voice about the gender relations in their community. The women left the Khan al Ahmar communities at several occasions; they recorded some of their stories on tape and held a public meeting in Bethlehem.

Young women at the Sumud Story House in Bethlehem came together to demand the municipality of Bethlehem to take care of parking problems and make the environment around the Wall in north-Bethlehem more livable.  There was networking with the police and the municipality and a final advocacy action nearby the wall.

Young women in Tel Rumeideh street in downtown Hebron challenged the Municipality and CSOs for possible favouritism in allocating subsidies and services in Hebron downtown. As a result of the advocacy a clinic was to be opened in Tel Rumeideh with funds from the World Bank.

Young women in the Haret al-Sheikh community in downtown Hebron did advocacy for a children’s playground at the local school accessible for the children in the community, in cooperation with the Hebron district governor and Ministry of Education. They did a well-attended public action in the school’s courtyard, cleaning the area.  The Municipality put more benches and rearranged the playground.

Two communities, in Shuhadeh Street and Al Qasara and neighboring quarters of H2 Hebron, worked on improved health access and health services in downtown Hebron. The problems are partly due to a shortage in medical equipment and insufficient doctors’ availability, and partly because of the difficulty of finding convenient and cheap transport within the area. Due to the advocacy action the doctors started to work more hours. The demand was incorporated in a training offered to the women by the Ministry of Health and the Red Crescent.

In the context of an advocacy for beautifying the school and its environment, the Deir al ‘Assal school in the Dura area asked the municipality to repair broken school windows and a clean and improved playground of the school. The students encouraged their families to take part in voluntary work at the school. The walls were painted and some paintings were drawn which were related to the project topic.

Sikka school community demanded garbage containers to be placed from local village councils, Hebron Municipality, the Association of Solid Public Services and the Women’s Association for Recycling. The school advocacy action demanded the placement of garbage bins in the school environment. A paper recycling project was chosen by school youths to become part of a beautification advocacy action. Dozens of students started doing voluntary work bringing used paper to the machine.

Abu Al Asajeh focused on working with the disabled in this area. The department in Hebron implemented promises of organizing awareness training for disabled people and their families, arranging suitable entrances at some houses, and providing disabled with supportive tools.

Beit al Roush al Fouka focused on garbage collection. The youth group wrote a proposal with the help of the village council. The Hebron service promised to take part and help in the campaign and provide the village with garbage containers. There was the promise to activate the trucks which collect the garbage and begin collecting the garbage fees. This was a demand in the existing strategic plan and is now going to be implemented.

During the epidemic in 2020 many of the participants in the Hebron and Bethlehem areas were active in individual and collective contributions in civil society to confront the immediate difficulties people faced because of the corona virus crisis. Especially in Artas, north-Bethlehem (Sumud Story House), Walajeh, the groups in Hebron downtown and the schools in Dura area young people were active in a range of activities: providing economic relief, medical supplies, protection wear, first aid, informing the public about social distancing, and giving moral and material support and consolation to those who were alone, as well as in some cases morally supporting corona patients themselves. In the Bethlehem region, some 50 students from AEI’s inter-religious school project cooperated with schools involved in the EU project to support locals, especially in Beit Sahour, Beit Jala, Walajeh and Artas.

In 2020 about 250 participants in the Hebron area prepared a national advocacy campaign in terms of “public health: rights and services in” as a condition for creating local peace. During fieldtrips the 10 groups prepared their contributions to the national campaign in the form of arts and communication products.

A follow-up to the project: Several women participating in Hebron downtown are presently involved in a UN Women project for developing an early warning and response system with regard to conflicts in the Hebron area. The training and advocacy of the women in the EU project helped them to raise to a new advocacy level in which conflicts will be more systematically investigated and approached over a longer time frame.

The schools and young women groups in the Bethlehem area coordinated their local campaigns under the banner “Access to services and rights is access to life and prevents emigration.” The campaign followed three stages: (1) collecting experiences and stories, (2) a public digital campaign – with some joint physical and some digital activities, (3) a media component.