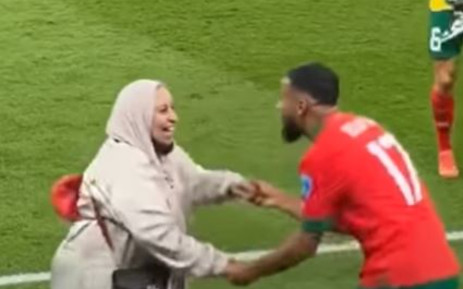 Besides the Moroccan squad, winners up until the semi-finals, the main winners of the World Cup are first the Palestinians or Palestine, witnessing the many Palestine flags waved on the field and among the audiences.

And secondly, the Arab mother. One after the other the Moroccan players and coach danced with their mothers on the pitch to celebrate these hidden heroines. Without their steadfastness in the family, they would not have reached this sportive zenith.

Years ago, when taking part in a viral Dutch-Palestinian school exchange, the Dutch school students and the Palestinian students from the Bethlehem area compared each others’ “heroes”. While the Dutch mentioned soccer players and what we now call “influencers,” many Palestinian kids mentioned their mother.

Once my teenage daughter brought back her school book in which the Palestinian mother looked with a stern face into the horizon, standing as a rock in the desert, as a symbol of sumud or steadfastness against the Israeli occupation.

On 10/11/2022 the Israeli parliamentarian Zvika Fogel, a brigadier-general and parliamentary member of the party “Jewish Power” of Itamar Ben Gvir – which is at the threshold of becoming a central member of the Israeli government – said in an interview with British Channel 4, that “if it is one Israeli mother crying, or a thousand Palestinian mothers crying, then a thousand Palestinian mothers will cry.”

“We are too merciful. It’s time for us to stop being so,” Fogel responded when he was accused of racism.

A few years ago the young Ahed Tamimi became a Palestinian heroine. In a memoir which a few weeks ago came out, and which she had written in collaboration with an Al-Jazeera journalist, she responded to the accusation of parental hate.

As a teenage member of an activist family in the West Bank village of Nabi Saleh, she had struggled for years against occupation, land appropriation and the building of the Wall. After she was arrested in December 2017 because of slapping an Israeli soldier, her mother’s video of the incident outraged many Israelis, which led to her arrest and subsequent imprisonment for no less than 8 months. Before Ahed was arrested, her brother, too, had been arrested twice, her father nine times, and her mother five times and shot in the leg once.

“The adults in Nabi Saleh are often asked why they allow their children to partake in the protests, willingly putting them in harm’s way. They’re accused of not loving us enough to protect us… But the answer is that our parents had no choice. Or, to be more accurate, the Israeli military robbed all of us, young and old, of a choice. At a very young age, most of us learned the hard way that we weren’t any safer inside our homes than we were out on the marches.”

She continues detailing the many assaults on the Tamimi home in the village and the surrounding yard and garden. By the father’s estimate, the family home had been subjected to 150 military raids as of September 2017.

Thirteen days after the slaps Tamimi was charged with assault, incitement, and throwing stones; her mother and cousin joined her to prison, both arrested in relation to the incident.

“Of course our parents worry about us, but they raised us to be strong and not to cower in the face of oppression. They also taught us while it is important to resist, we must never hate, because hatred will eat us from inside. We resist to live, because, ultimately, we truly love life.”

Ahed Tamimi and Dena Takruri, They called me a Lioness: A Palestinian Girl’s Fight for Freedom.  One World/Random House, New York, 2022.