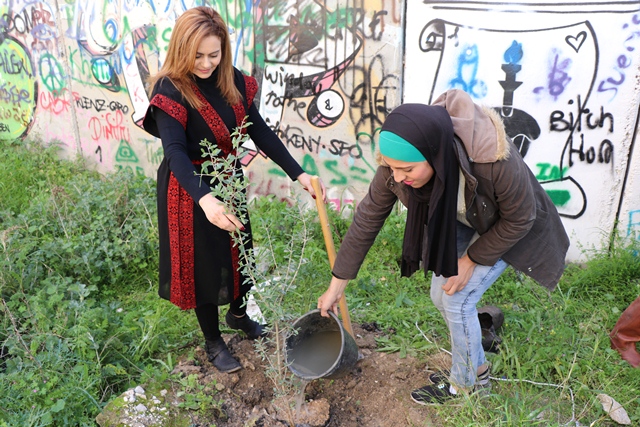 In a speech for the last public meeting of the Ecumenical Women’s Group Twente-Bethlehem (9/12/2021, Enschede), AEI staff Toine van Teeffelen gave a bird’s eye view of the history of the Arab Educational Institute using stories of hope and sumud as guiding concepts.

Stories humanize. Stories of sumud humanize even more. These phrases inspired the Arab Educational Institute (AEI) from the end of the 1990s on, when it started to operate as a civil society organization in the occupied West Bank. Its staff invested in the systematic collection and educational use of stories from and about Palestine.

The first projects included the use of Palestinian legends in moral and inter-religious education along with a people’s history of Bethlehem. Those projects led to the first publications of a new Culture and Palestine series edited by AEI.

During the second Intifada from 2000 on, AEI encouraged diary-writing and storytelling among its constituencies of youth, women and educators. The purpose was helping to give common people a voice in a world which had forgotten about Palestinian daily life and was focused on violence.

With the number of documented stories growing, AEI opened in 2005, in cooperation with a German web developer, www.palestine-family.net as an archive of a wide range of stories and visuals on Palestine. AEI’s growing number of youth and women groups contributed. A home-grown method which was cultivated in AEI’s groups – Read, Reflect, Communicate and Act (RRCA) –  turned out to be a highly effective tool for evoking life experiences and comparing stories.

From the end of the 1990s on AEI applied methods in which youths and women themselves did story research. A main purpose was to “communicate Palestine” towards international audiences in order to challenge stereotypes of Bethlehem and Palestine, and in doing so to humanize the image of the Palestinian people abroad.

In 2008 AEI opened the Sumud Story House near the Wall in north-Bethlehem. The House brought together women from the neighborhood and the larger Bethlehem area. A major method to lower its threshold as a neighborhood house was to nurture exchanges about each other’s life stories. The House became a place for Palestinian women to feel at ease and heal the traumatic experiences which were common everywhere in Palestine but certainly in this area where the Wall dominated people’s lives and

In this period the Arabic concept of ‘sumud’ became increasingly an inspirational guide to AEI’s work. Sumud, or steadfastness/perseverance, meant to AEI more than staying on the land or in the home. It meant an acknowledgement that Palestine or the Holy Land is a ‘land of testing’, in the phrase of one educator. Palestinians face many moments of being tested in a situation of progressive colonization under occupation. The samedeen – those who practice sumud – develop a life style which makes it possible to survive, if possible to resist but always to keep up a hope for a better, more just and peaceful future.

Sumud implies action, imagination and struggle in and out of one’s home. Sumud is striking deep roots in one’s home and environment but also to create connections to the outside world. Like hope, the practice of sumud does not imply a grand or master strategy, but more a range of tactics which can involve ‘small victories’ upon the occupation, upon one’s society, or upon oneself. Giving a strong response to an intimidating soldier at a checkpoint is a form of sumud, or standing in front of the bulldozer demolishing a home, refusing to leave one’s land, or refusing to be deadened by occupation or societal constraints.

Sumud has a strong social element. For instance, repairing broken relations in the community is a form of sumud, as the society becomes as a result stronger in resisting pressures. AEI tries to work on the cohesion of the society in its project “Citizenship and Diversity: Christian-Moslem Living Together,” in which 30 schools organize inter-religious lessons so that Christian and Moslem Palestinian students learn about each other’s religion and understand the need for respecting diversity. This activity yielded a book which showcased people’s stories, at home, in the school, with neighbors, and even in prison. The inter-religious project applied a range of story-related methods which were later on summarized in a methodology syllabus.

The women at the Sumud Story House did not associate sumud with just sacrifice and pain, but also with keeping up the joy of a culture that energizes Palestinian daily life. The various elements of sumud made the concept very suitable for the collection, documentation and use of human and humanizing stories or songs. One of the best ways of releasing tensions, increasing the joy in life, and strengthening social sumud is women’s participation in the Bethlehem Sumud Choir, convened by AEI since almost 15 years.

Sumud is communicating stories. In the years 2010-11 the Sumud Story House developed the so-called Wall Museum, consisting of large weather-resistant story posters attached to the nearby Israeli Separation Wall in the north of Bethlehem, near the main Jerusalem-Bethlehem checkpoint. The women of the House jointly chose and discussed key moments from their lives, which then in abbreviated form were turned into stories for the Wall Museum. AEI’s youth groups added their own stories, and more stories from outside Bethlehem were selected as well. The Wall posters were mostly in English, targeting visitors of Bethlehem. They were funded by private individuals or institutions abroad that found it important that Palestinian voices crossed the Wall to reach an international audience.

The Israeli army did not remove the posters, though fixing them was an activity certainly not without risk. At the moment more than 200 posters have been attached to the Wall.

In other school-based projects AEI applied the practice of advocacy. For instance, in a recent three-year project implemented at 8 schools in the periphery of Bethlehem, 400 students were involved in collecting stories used for joint advocacy to overcome community-related conflicts and tensions. In a special magazine AEI gave an overview of the youth researches and their methodologies as applied in the schools (see under ‘literature’ below). The youth formulated demands, started alliances, confronted decision-makers and managed to achieve various projects.

AEI’s women groups collected new stories, but in a different way than in the past. One women’s project in villages in the Bethlehem area used the story method in order to encourage women to talk about women’s rights violations in their communities and at home. This yielded a magazine which analyzed and contextualized some dozens of such human rights stories.

In a recent project (2018-2021), with some 600 youths, mainly young women and girls from the southern West Bank, the participants presented their stories of hope. The stories were collected in an e-book (see below) as well as publicized in a daily series of Instagram posts. The stories play a part in advocacy efforts by young women to beautify a village, or to improve local services in the fields of health, education and transport.

A new follow-up AEI project in Hebron focused on an “Early Warning and Response System’, aiming at preventing or intervening in local conflicts including harassment at checkpoints and domestic violence. Some 140 young women have been collecting and documenting stories of conflict and oppression as a base for interventions – generating new ‘sumud stories of hope’.

In sum, AEI’s use of sumud stories of hope involves the following:

A special thanks to AEI’s funding partners.

Magazine “Hope is a Necessity, Despair a Luxury: Youth Research on Conflict in the Palestinian West Bank”

Story e-book, with introduction about approach and method youth research:

“Never give up – and never stop caring”

2020 Citizenship and Diversity: Christian-Moslem Living Together in Palestine: A Documentation of Methods and Methodological Approaches. AEI, Bethlehem.

[Page through the publication]

Sumud at the Sumud Story House

Alexandra Rijke and Toine van Teeffelen, To Exist is To Resist: Sumud, Heroism and the Everyday, Jerusalem Quarterly (2014) 59.
https://www.palestine-studies.org/en/node/165375