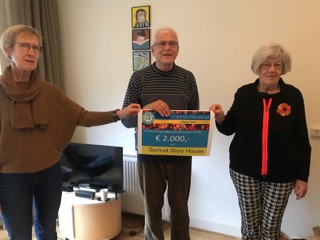 The Arab concept of Sumud, literally steadfastness or fortitude, inspires women’s work in the Sumud Story House of the Arab Educational Institute (AEI), a Palestinian NGO for community education in the occupied West Bank which is part of the international peace movement Pax Christi. Sumud is sometimes symbolized by a cactus or olive tree: it refers to the resistance of the cactus as well as the sweetness of its fruit, and to the deep roots of the olive tree as well as the spreading of the evergreen branches toward the world. AEI’s work focuses on developing community steadfastness or resilience with these symbolic meanings of sumud in mind.

The Sumud Story House is close to the 8-9 meter high Wall erected by Israel in northern Bethlehem surrounding Rachel’s Tomb, a sacred site no longer accessible to Palestinian residents of Bethlehem. In addition to hosting various women and youth groups, about 20 women members of the House participate in an amateur choir, the Sumud Bethlehem Choir, which has been performing on numerous occasions for more than ten years now, including when foreign visitor groups visit the House. The songs are about Christian-Muslim living together, Palestinian traditions and a just peace without occupation.

Initially, the 50-70 women who over time have gathered in the house wanted to release the tensions of their lives, pressured as they were by the economic and freedom of movement restrictions imposed by the occupation. They collected their stories based on the conviction that storytelling is part of social change. AEI’s experience is that when people gain the confidence to tell and share their own stories, it changes their lives. Many of the stories of the women of the House are on the nearby Wall around Rachel’s Tomb on large, weatherproof wall posters.

The Sumud House participates in a number of women’s projects of AEI. One has been supported over the past three years by the European Union and the British aid agency CAFOD. It facilitated advocacy actions by 600 school-age teenagers and young women up to the age of 35 in 20 local communities in the districts of Bethlehem and Hebron. In groups of 20-30, they have been active in their community around themes such as waste disposal, educational opportunities and medical facilities after being trained in advocacy, communication and international law, among other subjects. In 2020 and 2021, AEI was also involved in the development of a conflict prevention system in the inner city of Hebron. It was set up by more than 100 local Palestinian women and funded by a women’s institution affiliated with the United Nations (UN Women). Countering violence against women is an important aspect of the conflicts the project aims to address, in addition to informing women in a timely manner about the many problems at Israeli checkpoints in the city.

In addition, a series of sessions was set up last year on the theme of ‘trauma’, in collaboration with a youth group and two young women’s groups from the House. A qualified psychologist led 15 workshops with titles such as “How Do You Act When You Are Angry?” “Tolerance helps get you out of the prison you sometimes put yourself in.” “How to transcend inner walls?” “The steadfastness of Palestinian women and their role in the community.” The sessions were followed by a total of 45 young people and young women (up to 30 years).

The women of the Sumud House let it be known that the contribution of Soroptimist helps them materially and morally. They are grateful for the interest and support: “Support from abroad, such as the Netherlands, is essential for our Sumud!”