He wore his white coat and put on his blue face mask. How much he started to hate this mask needed in the corona period. It became part of his official uniform as a doctor.

He breathed deep and went out of the changing room to start treating the infected people. Seventeen days had passed in this catastrophe that exhausted all his emotional and physical strength. He tried to charge his energy by sleeping but his feelings were smashed. Nothing could heal his tired soul because 25 people died from corona while he treated them. This was a total of dying persons he had never experienced in his career during such a short period. This new experience exceeded his ability to handle it but at the same time he stayed recognizing the needs of  the people and the community.

Then suddenly he remembered the old woman who was under his care during the past ten days. She was like a mother for him, he used to talk and cry in front of her while trying everything. She was so strong and full of faith and trust in God despite her coronavirus infection. She used to console the doctor in this difficult time. On the tenth day, the doctor was in very bad mental condition due to the death of three patients. He finished his work time and went to see the old woman. When he entered her room, his life turned black for a while. The old woman had died. His second mother and his only shelter had gone.

Then he was informed that the old woman left a letter for him before she died. The text of the letter was as follows:

“Dear handsome doctor who visits me on daily basis and cries for me. You are a miracle and a beautiful angel. Hope that this day won’t be hard on you because you did not find me. I know it is my end but not for you, my little boy. I struggled and lived my life according to God’s will.  I command you to take care of your health. My tears fell down when I wrote this to you because I didn’t want to leave life alone in this difficult period.

We didn’t have the chance to know each other better; all our meetings were full of tears and pain. In spite of that, I want you to continue your journey in healing people and never lose hope because everything will be okay one day. Stay strong, fight and never give up. Please don’t cry too much for me. I‘m just a stranger, an old woman you know from the hospital. May God bless you … I love you, my son.”

The old woman’ words gave him hope and strength to continue his life. He kept repeating the words “Never Give Up” and continued his steps to the patients’ rooms.

A school student from Bethlehem area 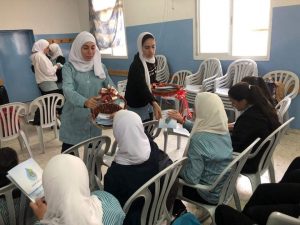 This story is part of an Arabic-language AEI publication that came out of the project “Palestinian Youth Protecting Civic Values in Conflict” (2018-2020. It presents  a selection of stories collected by 8 groups of 40 Palestinian youth (13-17 years) from different communities in the larger Bethlehem district: Beit Jala, Doha, ’Abediyyeh, Artas, Dar Salah, Aida refugee camp, and Battir. The students were asked to write about civic values in times of crisis and conflict, especially the value of respect in its various meanings.

Due to the constraints imposed by the corona virus crisis in spring 2020, the students did their story research in their directly surrounding community, and talked with neighbors, friends and (extended) families. They were encouraged to speak about occupational issues of land and water but also to ask about ways how the corona crisis impacted on life. The majority of students came with at least one detailed exemplary story of respect, developed alone or in a team.

AEI would like to thank the over 400 students who took up this project as a challenge in their education and who may become future leaders in their community. We would also like to express gratitude to the funding partner Zivik Ifa and the German federal government for making the project and this publication possible. We thank the Ministry of Education and Higher Education of the Palestinian authority who facilitated this project, along with the many educators and educational teams in each community for animating the students and taking care of good reporting.